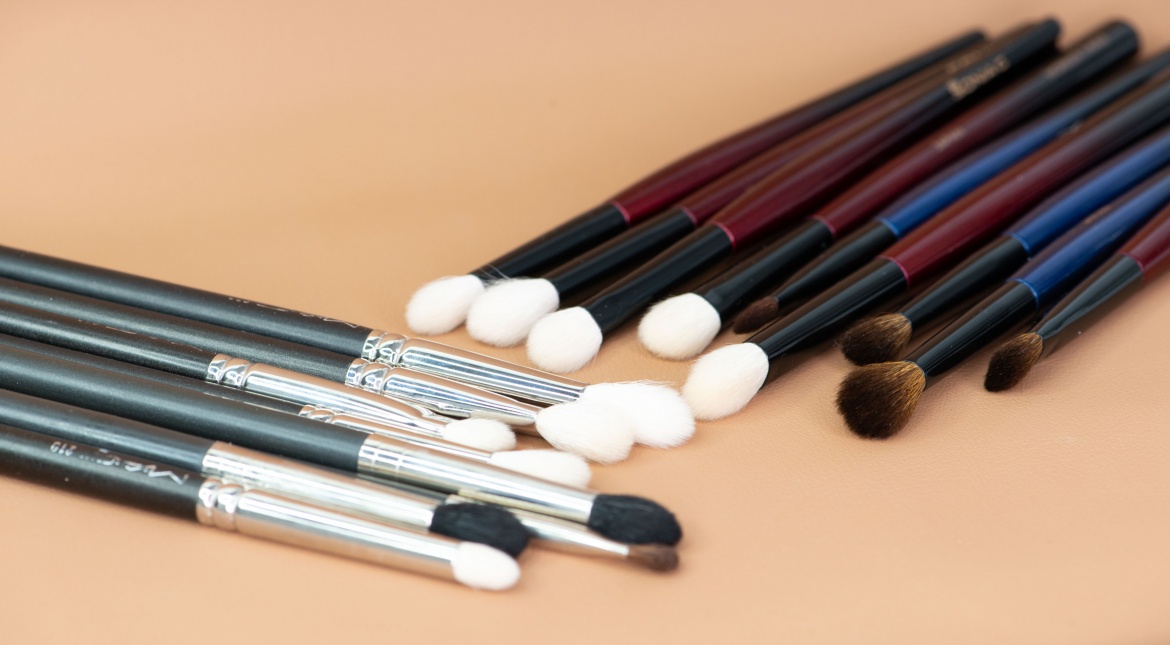 I started with very basic brushes then upgraded to Mac as soon as I tried them. Mac brushes were more precise, they did a much better blending job and they allowed me to work so much faster than before, I was thrilled! They were reliable and exactly what I needed.

After many years enjoying them on a daily basis, in just a matter of months something changed: my skin became too sensitive. Probably due to ageing and accentuated by an accident that caused very intense chronic migraines. With such sensitive skin, I started looking for new ways to apply make-up and in parallel started my research for softer brushes, this took me straight to Kumano, Japan.

The new brushes I discovered in Japan were extremely soft and luxurious! After a couple of years, I noticed that the brushes I was reaching for 80% of the time weren’t necessarily the softest of the bunch, but certainly the fastest for the job.
As a result, today I aim to create brushes that we automatically want to reach for, not only because they are soft, but because they are fast and effective. The key is to find the perfect balance between efficiency and softness.

The purpose of this post is to answer your questions (Instagram, email, direct msgs) asking which Sonia G brush would be the dupe for a specific discontinued Mac natural brush. The Mac brushes (natural bristles) that I am showing you today are all likely discontinued but these oldest Mac natural brushes remain such a great reference for many of us! Today Mac switched to synthetic bristles and I understood that even only a few of the synthetic ones are still made in Japan.

My brushes were designed from scratch and I am happy to explain the similarities or differences to the oldest Mac in terms of functionality. If you have any other questions or if you would like me to add other Mac brushes and compare them, please do leave me a comment at the bottom of this post. I own most Mac brushes but the questions I have seen so far concern only the ones mentioned below.

I have several of the discontinued natural Mac 239. Since the 239 is bundled with natural bristles (sokoho goat) and it’s quite small, the tiniest difference in the batch of bristles may have a noticeable impact on how the brush feels and looks, but this is completely normal.

The Builder Three is denser, thicker and a bit wider than the Mac 239. Since the Builder Three has more thickness to its body, the tip is less flexible and more stable, it helps to obtain a smooth, more opaque application faster. It works efficiently with sheer, hardly pressed and also powdery shadows and delivers a placement with no patchiness or grainy effect.

The swatches done with these two brushes are quite similar, the Builder Three will work with more opacity, whether you use the flat side or the tip. The Mac 239 will deliver a more diffused application.

Conclusion: you can use the Builder Three for the same purpose as the Mac 239 but it will work with more definition and intensity.

FAQ: Is the Flat Definer similar to the discontinued natural Mac 228?

FAQ: Is the Flat Definer softer than the discontinued natural Mac 228?

The placement with the Flat Definer is more precise and defined specially when working with the tip. It has more layers on the sides, a thicker ferrule for stability at the tip and for more strength -and less fall out- when picking and applying the products.

Conclusion: you can use the Flat Definer for the same purpose as the discontinued Mac 228 but it will work with more precision when using the tip and more opacity when using its sides.

FAQ: What is the closest crease brush in your collection that is similar to the discontinued natural Mac 226?

It is the Crease One. The ferrule of the Crease One is bigger though, approx 7.2mm versus 6.6mm for the discontinued Mac 226 but both have a tapered shape.

The swatches reflect quite nicely what you’ll see happening on the eyes: this Mac 226 will target the application but will deliver more diffused edges, the Crease One will target and accentuate the placement or blending at the very tip of the brush.

The Crease One is denser, the bristles under the tip remain more tight together, this is helpful when we work on a hooded lid for example, to target the placement just where needed.

Conclusion: you could use the Crease One for the same purpose as the discontinued Mac 226 but the placement will be more precise, less diffused.

FAQ: Is Pencil Pro similar to the discontinued natural Mac 219?

The Pencil Pro has a wider ferrule compared to the Mac 219 and it’s more rounded at the top but in terms of results, it is indeed the closest.

The Mac 219 looks pointier but it’s more flexible, therefore the placement is more diffused. The Pencil Pro works with more consistency in the movement and intensity since it is denser and firmer.

Conclusion: The Pencil One would be the one to grab if you need more finesse and precision with the smudging or placement but in terms of similar results to the discontinued Mac 219, the Pencil Pro is the closest.

FAQ: What brushes in your collection are closer/dupes to Mac 221 and Mac 222?

My brushes tend to be denser in comparison to many other crease brushes but I think that Mini Booster and Classic Crease are the closest in terms of functionality.

The Mini Booster is denser and quite firm but it’s also rounded at the top so in terms of shape it comes close to the Mac 221. In terms of application, the Mac 221 is going to provide a more diffused application and cover a wider area, while the Mini Booster will target the placement or the blending with more determination.

The Classic Crease is more airy (compared to the Mini Booster) but still denser in comparison to the Mac 222, however, the result is quite similar in width and intensity.

Conclusion: The Mini Booster and the Classic Crease have been designed specifically to provide a placement with elevated control -which I am very picky about- and little to no fallout. They could do a similar application to the Mac 221 and Mac 222 but the Mini Booster may pack too much of a punch, proceed with precaution 🙂

FAQ: Is the Worker Pro a dupe for the discontinued natural Mac 217?

The shape is a bit similar but the Worker Pro is more oval and much smaller. In terms of functionality, the Worker Three comes closer. Then it depends if you use the sides or the tip…

The Worker Pro is smaller, so it’s going to work with more precision compared to the discontinued natural Mac 217, well, it also depends on the Mac 217 you have as they all splay out a bit differently, some more than others.

My brushes aren’t dupes for Mac brushes but they could allow for a similar functionality, with some nuances with regards to precision or opacity.

Thank you so much for your continuous interest and support, I am always so excited to read your comments and emails and to get to know so many Fude lovers !!!

The Blender Pro is actually much denser so it wouldn’t feel quite the same and probably make too much of an opaque application on the first contact.

The new Mac 224s is actually completely different to the old Mac 224, not only because it’s synthetic but also the shape and density are totally different.

I am here to unleash my passion and talk about brushes, the artisans, discover new brands and take you along with me in this captivating adventure.

Behind the Scenes – The Microfiber Towel

A journey with my boyfriend, my motorbike...

Thanks for the comparison, I am going to add crease two to my collection. Love your brushes and blog 🙂

Thanks for this, just ordered my first brushes and am happy to know the booster is similar to my favourite MAC 221! I ordered it because Tarababyz loves it 🙂

This site uses Akismet to reduce spam. Learn how your comment data is processed.

Sweet. You found me.

A make-up brush is more than just a tool, specially when handcrafted and created by artisans, I write about the brushes, the artisans and share all about my passion.

There has been a problem with your Instagram Feed.
Error: No posts found.